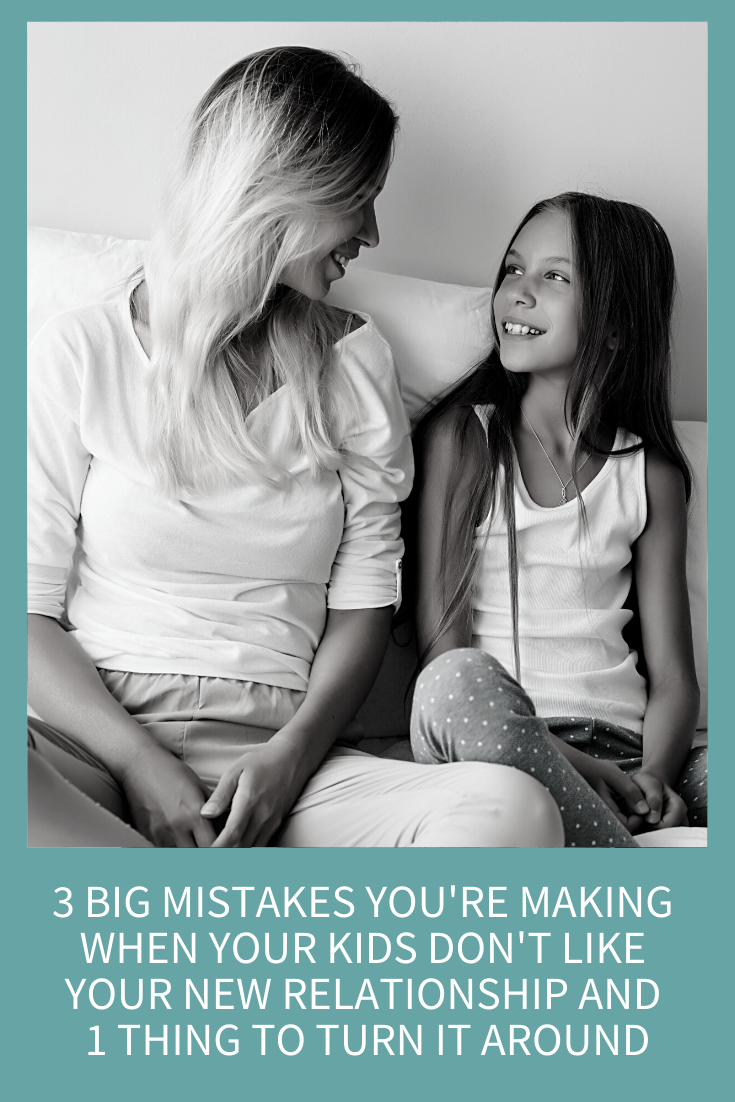 8-minute read
Prefer to listen to the podcast? Click here!

Mistake #1: You’re Not Really Listening to Your Kids

You think you’re listening, but you’re not really listening. You might even say something that you think is connecting and empathetic like, “I hear that this is hard for you but I love you and I’m here if you need anything.” While that’s a lovely thing to say on some level, it does nothing to really further the conversation and get to the root of what’s happening. There’s a try at saying “I hear you” but then there’s a “but” or there’s just no way to really move forward so your child ends up not feeling heard or listened to, which ups their anxiety and resolve to not like your new relationship or you.

You’re not really listening because you’ve decided this relationship is wonderful, you’re in love and even if they’re making good points, you’re dismissing them because you’re afraid of allowing anything else in (which bring us to mistake #2).

You’re coming from fear and the kids can sense that so that has them worried too. Maybe you have your own doubts about the relationship or are worried that your relationship won’t be able to move forward if the kids stay upset. Maybe you’re trying to get the kids on board in a variety of ways and they feel that subtle manipulation and trying to be controlled (which they’ll resist). When there’s a separation kids have no control and their whole world is rocked. Now here you come with this new person and they’re feeling even more out of control and left in the dust.

Mistake #3: You’re Focused on Your Pace, Not Theirs

This is the biggest mistake I see: you’ve fallen in love with this new person. It feels so good and even like such a huge relief after your split with your ex. Yeah! You’ve got all the feels! Whether you wait awhile to introduce kids to a new relationship or start meeting everyone maybe too quickly, you’re missing a big piece.

The kids are not where you are! You’re moving at a certain momentum but your kids are at their own momentum! One of my spiritual teachers explains it this way: Have you even seen one of those little carousels in a park? Not the ones with the horses, but these smaller round metal things with a bunch of handles? I used to love these myself when I was young. You’d hold on and run alongside it until you got that thing going really fast and then you’d jump on and start spinning around. Now, if another kid tried to jump on with it going really fast, they’d often have a lot of trouble (I even remember having some serious bumps and bruises trying to do this when I was young). What you need to do is wait until the carousel slows down enough so you can start running along beside it and then (and only then) you can jump on.

So back to your situations…you’re spinning really fast on your love disk. You’re so happy and in love, but your kids aren’t at the same momentum you are. You’ve got to slow down a bit to where they are and then gradually speed up again with everyone on board.

Dr. Constance Ahrons conducted a 20-year study of children of divorce and found that most kids find their parents’ dating behaviors strange and confusing. Kids under age ten often feel angry or sad and possessive of their parents while teenagers find open affection disconcerting.

So, while you’re flying on the wings of love, they’re looking at your relationship from a completely different vantage point.

So, how do you turn this all around?

You have to have different conversations from a whole new place when your kids don’t like your new relationship. Start really listening and asking the right questions. There’s a way to set yourself up for success.

Here’s my five-step process for effective conversations with your kids:

Any conversation you want to have with your kid(s) about your new relationship should start with your intentions.

If you end up in a conversation driving in the car and weren’t expecting it, it’s great to say your intention out loud as soon as you notice any defensiveness or shutting down. If you plan the conversation, start it with your intentions.

Setting intention puts everyone in the right frame of mind and will program the RAS to look for good things. It’ll help you all stay focused and mindful during the conversation.

Stating your intentions helps everyone involved feel safer and more connected. If you do nothing else, do this step: it’s a game-changer!

Actively think of being curious during this conversation. You really want to understand where the kids are coming from and why they feel the way they do about your new relationship or your new partner. So, listen like you’re wrong and be in a mode of seeking to understand (as opposed to being understood).

Your inside voice should sound something like: “I wonder why they’re having this reaction? I need to figure that out. What’s really going on here?”

Remind yourself why you’re listening:

Listening without getting defensive or hurt is your goal in all this. Again, don’t just say, “I hear you but…” Really be curious. Maybe they’re even seeing something you don’t. Maybe your love is blinding you to something. You’ve got to get to what they’re thinking under what they’re feeling.

When you’re curious it gets you out of trying to convince them of something (fear-based) and keeps you in that open, love-based frame of mind.

As I mentioned in the mistakes, you likely haven’t really been listening to what the kids are saying about your relationship. Do you go into any of these conversations with your kids with a sense of open curiosity? Are you listening like you’re wrong?

One of the things to do when your kids are complaining about your new partner or have rejected them in some way is to ask some open-ended, collaborative questions such as these:

Remember that your kid (or theirs) is likely feeling a sense of loss of control. So, you can ask questions that seek to give them more of a sense of control such as:

I’m realizing that you don’t really know X at all so how would you like to get to know them? What’s a first, small step you’d be comfortable with?

Collaborative questions are key when you find that your kids don’t like your new relationship.

It’s important to remember that your kids’ complaint, comments or feedback is about what they need, not what you need. Listen for what they need, which isn’t always what they’re asking for. Ask clarifying questions to try to really understand what’s being said.

You can clarify what they said with the ever-popular (and effective): “What I heard you say is X.” You can also get more information by asking, “Can you tell me more about X?” “Can you give me an example of X so I better understand what you mean?”

Remember not to SAC. Ask questions meant to gather more information, not ones disguised as suggestions.

Step 5: Encourage Them to Ask Questions.

This can be a tricky area because you want to keep your boundaries (there are certain things that are none of their business) but you want to encourage an open conversation, which means both of you asking questions and being curious.

Developing Empathy in Relationships is the Key to Connection and Communication

If You Want to Communicate, You’ve Got to Listen First

Constance Ahrons, We’re Still Family: What Grown Children Have to Say About Their Parents’ Divorce