HOW TO COPE WHEN A LOVED ONE HAS BORDERLINE PERSONALITY DISORDER 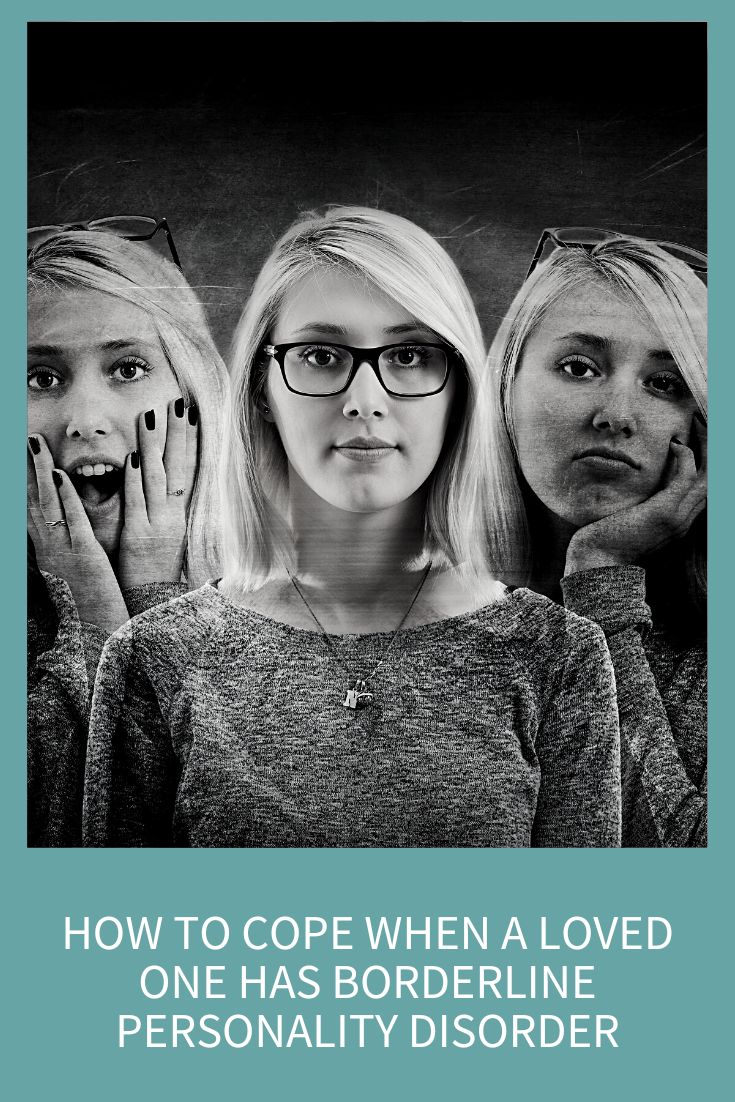 They love you one minute and hate you the next. They seem to cause trouble in all their relationships. They’ll go from sweet and loving to furious and lashing out. Yup. That’s life when a loved one has borderline personality disorder or BPD. Today I’m going to explain what BPD is exactly and the top ways you can help others and yourself. So stay tuned!

Before we get going, I’ve got to give you some caveats:

What Exactly is a Personality Disorder?

There are four main defining features of personality disorders:

These four qualities combine in different ways to form the ten personality disorders identified in the Diagnostic and Statistical Manual of Mental Disorders, known as the DSM-5-TR (meaning fifth edition, text revision). This is the big book we use to diagnose mental health disorders.

These ten different personality disorders are grouped into three clusters:

What is Borderline Personality Disorder?

People with Borderline Personality Disorder (or BPD) have a hard time regulating their emotions and feel them more intensely and for longer periods of time. Because of this, they have a hard time coming back to “normal” once they’ve been triggered by something. About 1.6% of adults in the United States (about 4 million people) have BPD, with almost 75% being women. More recent research suggests that men are likely equally affected by BPD but are misdiagnosed with PTSD or depression.

Since this podcast is heard in over 170 countries, I couldn’t look up statistics everywhere, but I looked up a few for perspective. Canada is very similar to the US, with an estimated 1% to 2% of people (mostly women) being diagnosed. In Australia, the numbers are between 2 and 6%, with that same majority of women being diagnosed, and in Great Britain, the numbers are also similar, coming in at 4.4%, yet again with the majority of those diagnosed being women.

There are a few specific characteristics of people with BPD. While someone might not have all of these, they will have at least three if this is an official diagnosis.

Some of the other things I commonly see with this diagnosis include:

We don’t know what exactly causes BPD, but there are some main contributing factors:

People with BPD tend to view the world in black-and-white or all-or-nothing thinking. When they do this, they easily misinterpret and misunderstand the words, feelings, actions, and motivations of other people. As they see the world this way, they have intense emotional reactions (remember, we feel the way we think) and then have a hard time regulating these feelings. The more they can’t regulate how they’re feeling, the more upset they become, which often leads to self-destructive and impulsive behaviors. When they do this, their skewed thinking actually becomes a self-fulfilling prophecy.

For example, about a year ago, I was working with a client whose wife has BPD. He’d been having some heart palpitations and other symptoms but didn’t want to tell his wife before he went to the doctor to find out what was going on because he didn’t want to deal with her upset and overreactions. Because he was worried about his health, he’d been acting a little distant and quiet. She noticed, of course, and started to spin. She accused him of cheating. At this point, he admitted that it was a health thing, but now she didn’t believe him and thought he was lying to cover up the cheating. Over the next few months, she followed him around, breaking into his phone and email accounts and stalking his social media. He got so sick of her behavior that he did, in fact, finally choose to leave.

How Can I Help Someone Struggling with BPD?

First and foremost, I’m going to tell you that there’s little you can do on your own to help someone struggling with BPD. Your best bet is to figure out a way to get them to a professional trained in helping someone with BPD. There is one main type of therapy that’s been proven effective for borderline personality disorder, and that’s something called Dialectical Behavior Therapy or DBT. In fact, it was specifically developed to treat people with borderline personality disorder.

DBT was developed by psychologist Marsha Linehan in the 1970s and is a type of talk therapy based on cognitive behavioral therapy (CBT). CBT helps people understand how their thoughts affect their feelings and subsequent actions. It helps people reframe what they’re thinking in a new light so they can feel differently (because we feel the way we think). Dialectical means combining opposite ideas. DBT focuses on helping people accept their reality while seeing it in a new light so they can change and better regulate their unhealthy emotions and impulses. DBT is basically a skills training that’s mostly done in groups, but therapists can be trained to work with people individually too.

The training is focused on four main skills:

What you can do on your own to help:

As I said, getting professional help is top of the list when it comes to truly helping someone with BPD. Having said that, there are some things you can do. First and foremost is to have strong, clear, consistent boundaries. A person with BPD can be all over the place, so it’s important that you’re not reacting to them. Some days they’ll praise you, and the next, they might lash out in anger. Your job is to make sure that the tail doesn’t wag the dog. You want to be the one leading in the relationship, not them.  No matter how they act, you’re the steady ship with clear and consistent responses to any unhealthy behavior you see in them.

The next thing you can do is learn about BPD as well as the basics of DBT. If a person you loved had cancer, you’d likely learn all you could and understand the treatments offered so you could converse knowingly with them and support them in their decision-making. This same strategy should apply to mental illness, not just physical illness. Lastly, (as I stated earlier) get support and counseling for yourself. The stronger you are and the more able you are to be supportive while holding consistent boundaries, the better off they’ll be.

The Secret to Positive Thinking in All of Your Relationships

References and abstracts from MEDLINE/PubMed (National Library of Medicine)