HOW TO FORGIVE SOMEONE WHO HURT YOU IN 5 STEPS 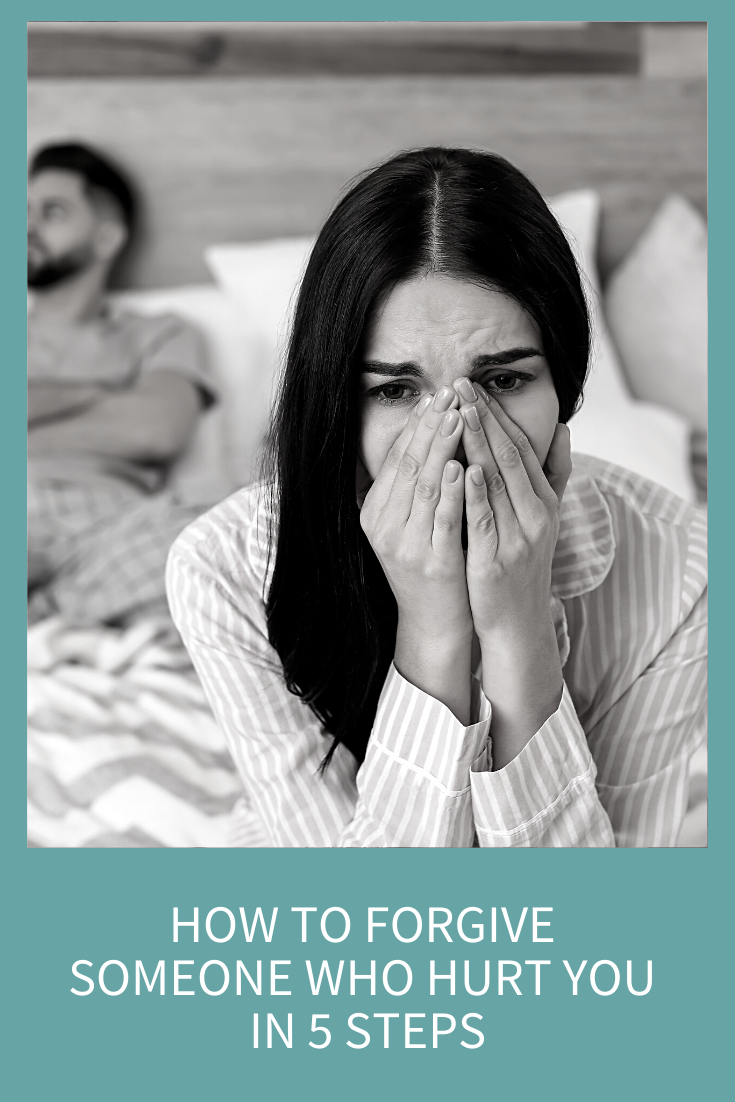 9-minute read
Prefer to listen to the podcast? Click here!

Do you bring up old resentments from the past with your partner? Maybe you feel like your dad has been insensitive and hurt your feelings. Maybe you cook dinner or work hard at your job all day and your partner doesn’t say “thank you.” Maybe you feel wronged by your sister and like she “should have known better.” You might have even made the dreaded statement, “If he or she loved me they would have done X,” or “If they loved me, they never would have done Y.”

Maybe your partner or best friend forgot something important like your anniversary, birthday or that you told them you were getting a promotion today. There are many situations that can lead to you feeling disappointed, frustrated, enraged or hurt in your relationships.

Forgiveness is often not about a single event, but a long series of hurts that have built up over time. Bishop Desmond Tutu said, “Without forgiveness, there is no future.” This is very true for all your relationships. And this is how to forgive someone who hurt you in 5 steps.

Problems you have when you try to forgive someone who hurt you:

1. You confuse forgiveness with trust.

Forgiving someone who hurt you does NOT mean that you trust them again. You might never even speak to them again, but you can still forgive them. In this way, you don’t need to hold the fear that they’ll take advantage of you again if you forgive them. As Dr. Robert Enright says, “Forgiveness is free. Trust must be earned.”

I’ve got a great video on the three keys to building trust right here:

2. You say you forgive, but it’s really conditional.

You “forgive” but it’s only until or if the other person starts acting differently. That’s not forgiveness. Forgiveness is a risk because we don’t always know what the results of our forgiveness will be.

Maybe you’re worried that your partner will think this means you’re ready to have sex, laugh and be happy together again. You’re thinking, “I’m not ready to be in a warm and intimate relationship with them and if I forgive them, they’re going to think we’re ‘back to normal.’”

4. You think you just need to “move on” or “forgive and forget.”

And you can’t or don’t want to forget.

5. You think forgiveness means the other person got away with something or that you’re condoning their behavior.

6. You think it’s impossible that your feelings towards this person will ever change.

So why try, right? All of this is why it can be so hard to learn how to forgive someone who hurt you.

The definition of forgiveness:

Forgiveness occurs when you no longer feel resentment towards someone who hurt you. Instead, you feel compassion and benevolence for that person, even knowing that they don’t deserve it. You forgive because you want to change the relationship you have with that person. Even if you never see that person again, if you stop feeling resentful and thinking about that person all the time, you’ve changed the relationship. They no longer have any control over you and your feelings.

“Forgiveness is an act of mercy towards an offender, and likely someone who doesn’t necessarily deserve our mercy.”

Forgiveness is paradoxical. You know that saying that it’s better to give than to receive? And you know how that’s actually true with how you end up feeling? Well, the same is true here. Forgiveness will set you free.

The benefits when you forgive someone who hurt you:

Dr. Robert Enright, who I recently had on my podcast, did a study at the University of Wisconsin-Madison where they set up tests with people experiencing specific kinds of anger and divided them into two groups. They educated one group on forgiveness and encouraged them to forgive (the other was the control group, so simply continued with the same therapy they’d had before, which did not include forgiveness). They were able to demonstrate that those who take the time to go through the forgiveness process become psychologically healthier.

Check out Forgiveness is a Choice: An Interview with Dr. Robert Enright

Two populations who participated in this framework were extremely notable to me. One group were incest survivors and another were men whose partners had gotten abortions against their wishes. When they tested the groups one year later, they still showed psychological improvement.

How to forgive someone who hurt you in 5 steps:

There are 5 steps repeated in various forms in all the research, and I’m going to take you through them. If you’re ready to really get down and do the work of forgiveness you can get my Forgiveness Master Class.

The first thing you need to do is make a commitment to yourself to do whatever you need to do to feel better. Forgiveness is for you and not anyone else. Remind yourself that forgiveness might not mean reconciliation with the person that hurt you and is never about condoning their actions. What you’re after is finding peace for yourself.

This is about changing your worldview, so you can change how you see and operate with the person you want to forgive.

Don’t wait for an apology. That’s right — you might not get an apology. If you’re waiting for someone else to apologize, it means that person still has control over you. It means the ability to take action is out of your hands and in someone else’s (someone who you’re pissed at, no less). Isn’t it time to put you back in the driver’s seat? Isn’t it time to take your power and the control back? How long are you going to let this person have a piece of yourself?

You don’t get closure from someone else – you get it from yourself.  Life’s too short to wait.

Acknowledging the anger or hurt is step three. Acknowledge does NOT mean wallow in it. You’ve got to acknowledge it and not push it under the proverbial rug but wallowing in it is bad too. Don’t speak to 10 different people about what you need to forgive because you’ll get 10 different opinions and it gets confusing to know your own mind. Instead, choose a special person to speak to (therapist, relative or friend you trust) in a confined way and space.

Now you’re ready to get some perspective. If this is something that happened ten years ago, remember that you’re not upset about something now, but something old. The hurt is past, so if you’re treating it like it’s happening now, that’s a problem.

Ask yourself some constructive questions:

I worked with a couple who had been together for fourteen years. The wife had had an affair that lasted about 4 months. The husband just couldn’t get past it and thought of her as a “liar and a cheater.” Now, let’s be real, the wife definitely did a super yucky thing and lied and cheated for four months, but, in general, this was NOT her personality. She was an honest, devoted mom and wife who had a serious lapse in judgment. There was no history of this before or after (I saw them over the course of two years) but he continued to label her from a “one time” (albeit four-month) time in their relationship. This is a good time for perspective.

The fifth step is to stop replaying (and re-stimulating) the event! If you find yourself during your day remembering anything about this issue, I want you to practice breathing or meditation when the thoughts come up, so you can calm your nervous system and disengage your “fight or flight” reactions.

The more you replay a negative event or conversation in your head, the more negative you’re going to feel. That feeling gets entrenched in your neuro-circuitry. Also, you start to twist what happened or what was said to make it closer to how you’re feeling and you lose Step #4 (perspective).

You need to ask yourself one question when you’re tripping on something: is this helpful?

Is thinking about this over and over and replaying it like a movie in your head helping you? Are you feeling happier and lighter? I seriously doubt it.

It doesn’t help to do the replay – you’re just focusing on being right, not happy. It’s time to focus on being effective, not correct.

When you let go of resentment and forgive, it doesn’t mean you deny that you’ve been hurt. It’s actually the opposite: you have to admit that you’ve not only been hurt but that you have the right to feel that way (no guilt needed). You can’t decide to change your feelings. You can’t say, “I’m not angry anymore” and expect it to work. But you can take action to change your thoughts, which will then change how you’re feeling.

The 3 Keys to Building Trust

Forgiveness is a Choice: Interview with Dr. Robert Enright

How to Rebuild a Relationship After Cheating