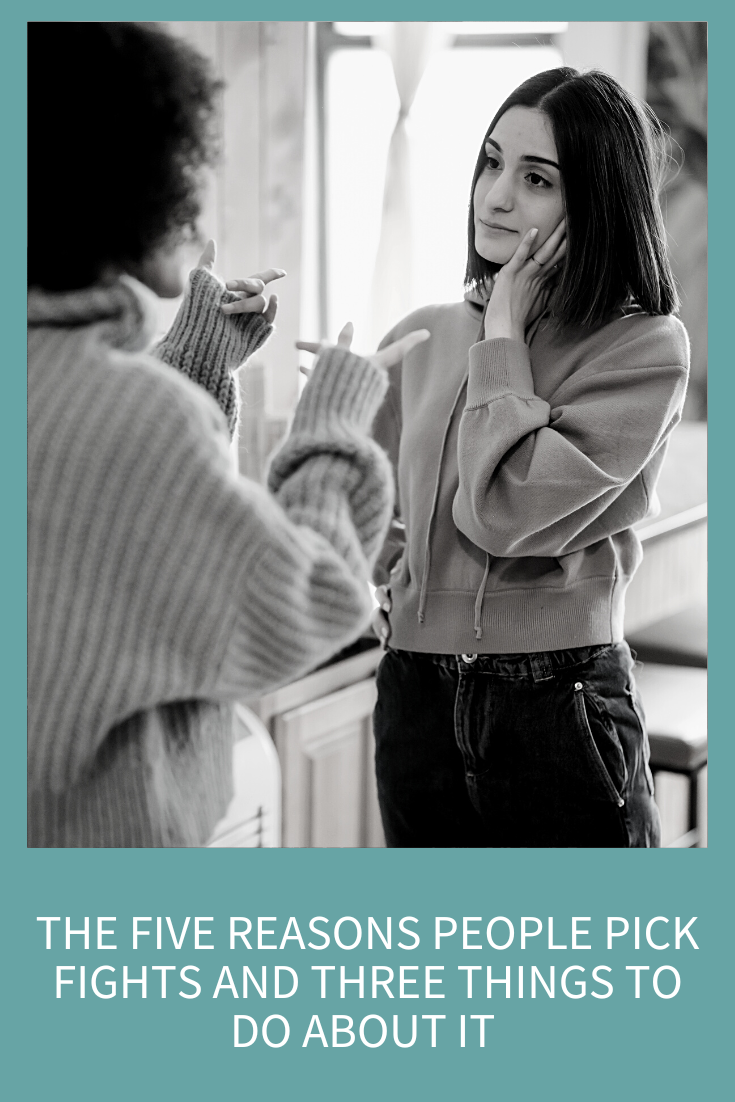 Do you know someone who always seems to be picking a fight for no apparent reason? Are they just argumentative, or is there something deeper going on? Today I’m teaching you the five reasons people pick fights and the three things you can do to make the craziness stop.

As you might imagine, there are many reasons people pick fights, but in my experience, they boil down to five main reasons that are all happening at a subconscious level (aka: they don’t realize they’re doing it).

#1: Self-sabotage: many people are uncomfortable when things are going well – it makes them feel out of control, and they’re constantly “waiting for the other shoe to drop,” which makes them anxious. So, usually unconsciously, they pick a fight at work, with their best friend, or partner as a means of gaining control again. When they pick a fight and engage the other person on that level, they feel better because they’re back in control of the relationship.

#2: It’s all they know: This is what they saw growing up in their families, so they think this is how you show others you care. Communication is a skill. Regulating your emotions is a skill. Listening is a skill, and you learn all these skills in the house where you grew up. How you saw your parents or siblings relating to one another and to you is what you learned in all these areas. Sadly, picking fights with others for no reason is a learned communication skill

#5: It’s Old: There’s a difference between someone who picks fights with everyone versus someone who just seems to pick fights with one person in particular. If someone picks fights consistently with their partner but no one else or with their mom but no one else, then it speaks to old feelings, past resentments, or hurts that haven’t been resolved. All those feelings are swimming around, but they likely don’t realize it, and they’re just in a bad state of mind when they interact with this particular person. They’re looking to hurt them as they’ve been hurt.

I want to also note that picking fights, irritability, and angry outbursts can also be signs of mental health issues such as depression or anxiety. It’s always important to see a mental health provider to rule out any other reasons if someone is struggling with this issue.

Three Tips for Dealing with People Who Pick Fights

Someone who’s always picking fights has low self-esteem, feelings of unworthiness, and they’re lonely and scared (even if they don’t present that way). Much like a bully seems tough on the outside, but they’re not on the inside; this person is the same. I know it’s hard because they’re driving you crazy but do your best to remember that they’re doing the best with the tools they have (and they’ve got crappy tools).

Finding compassion for people who pick fights is one key to making it stop. As you see them for who they really are (scared, without tools, lonely), you can find it in your heart to be as kind as possible. This doesn’t mean you need to hang around for their craziness, but it does give some perspective and calm for your side of the street.

Drawing boundaries from a loving place is always our best next right action. You can tell the person that you’ll leave the conversation if they continue to treat you a certain way, or you can draw boundaries with how often and when you’ll see them. Boundaries are important to keep your standards intact regarding how you allow others to treat you, but they should always, always, come from a compassionate, loving heart.

When someone picks a fight with you, stop the conversation and say what you’re feeling, and then ask how they’re feeling. You might say, “I’m feeling a lot of tension all of a sudden. How are you feeling right now?” They’ll likely try to avoid this question (“I was just trying to get my point across”) or tell you what they’re thinking (not feeling) and say, “I feel like you’re not listening.”

Don’t let them hijack the conversation. Remember that picking fights are largely unconscious; they don’t realize they’re doing it, so when you bring them to the present moment and ask them again to name a feeling, it will de-escalate what’s happening immediately. Hopefully, they’ll be able to name an actual feeling or two, and then you can speak to them from that place. We connect with feelings, not thoughts, and they are trying to connect, even if it doesn’t look that way.  At the very least, they’ll walk away (probably in a huff), but at least you don’t have to be in this conversation anymore. Do this often enough, and it will change the dynamics of how the two of you interact.

If the person who picks fights always seems to pick them only with you, it’s time to say something directly (and from love). “Hey, can I speak to you about something? I’ve noticed a pattern in our relationship. I feel sad and frustrated when we argue. It feels as though you’re picking fights with me. I understand it might not feel that way to you. I can only tell you my experience. For me, it makes me feel disconnected and distrusting when our conversations take these turns. I want to create a new way for us to communicate. What do you think we could do to shift things into a more effective way to communicate?”

Is Self-Compassion the Secret to a Happy Relationship

How to Overcome Guilt and Regret When Setting Boundaries