THE SECRET TO DIFFICULT CONVERSATIONS 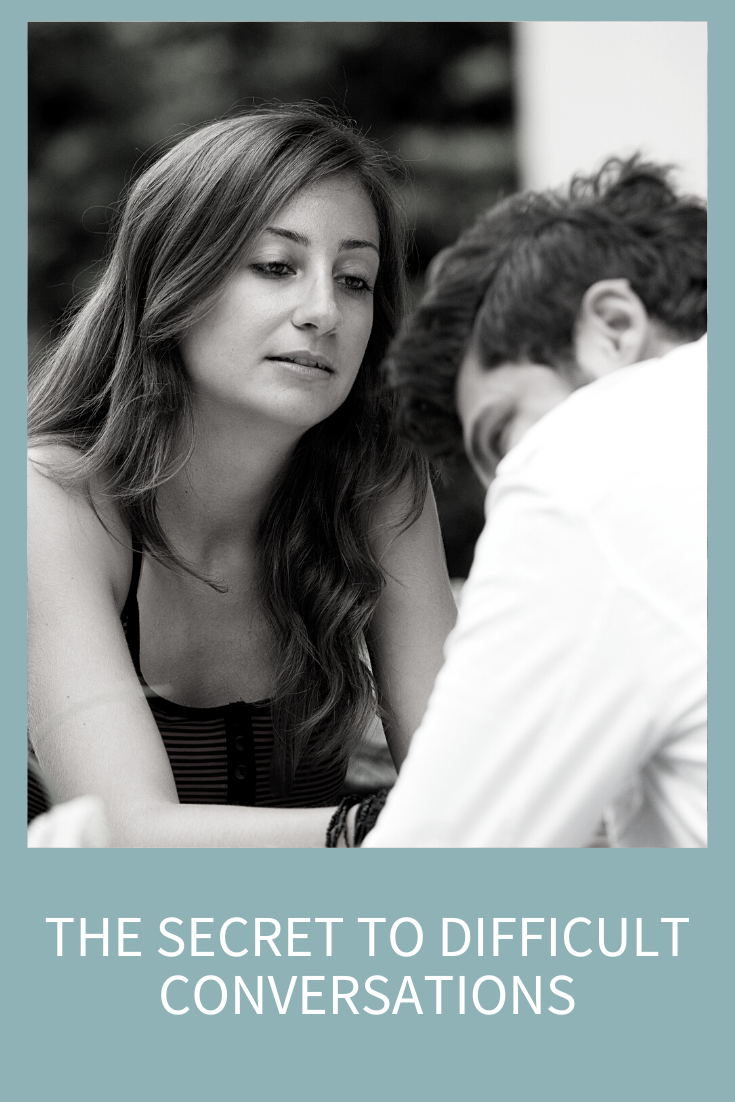 We have to have them, but we don’t like them: difficult conversations. Even if you’re someone who’s more comfortable with conflict, no one really likes to have an exchange that you believe is going to make you or the other person uncomfortable, angry or sad. Whether you’re struggling with your partner, a friend, family member or coworker, I’m here to help! Today I’m teaching you with my three-step process for turning difficult conversations into healthy connections.

The Three-Step Process to Having Difficult Conversations

If you go in nervous and upset internally, no matter how great you are externally, the other person will pick up on your resistance and anxiety and the conversation won’t go as well. You’ve got to spend a minute calibrating yourself to a good place first, if that’s possible. I know sometimes these difficult conversations are happening at a time you didn’t expect but, no matter what, try to take a second to gather yourself and calm your brain.

Then I want you to state your intention (out loud and both parties, if possible).

What’s your intention for this conversation?

You can’t read anyone’s mind and they can’t read yours! Stop saying, “I know what she’s going to say” or “I know how he’s going to react.” When you do that, not only will your energy be off (which the other person will pick up on), but your brain will try to prove you right. It gets you nowhere. You’ve got to think, “Do I want to be correct or effective here?” If you must read minds, how about thinking something positive like “We’re both going to be open and willing to listen.”

It’s all about being curious and not going in with your mind made up and so sure of what’s going to happen. You’re just doing that to protect yourself from hurt so that’s coming from fear and you can’t have a great, connecting conversation where you feel heard if you’re coming from fear.

Curiosity is one of the most important things in any relationship. Curiosity is key because it keeps your mind active and open. Mind reading is closed and narrow.

3. Be out to learn something, not prove something!

Get out of the win/lose mindset when you enter these conversations. You’re not trying to win and make them think like you do. Instead, your intention is to understand where they’re coming from. It’s funny, when your goal is to understand, it’s often when the other person is willing to change their mind. But when your goal is to win, it’s usually when they’ll stick hard and fast to what they want.

When you’re pushing from that place of “getting them to understand” you’re coming from fear-based emotions like impatience, intolerance and frustration. You’re irritated and the other person ends up feeling railroaded or like you’re trying to manipulate them – and no one “wins” in these conversations.

You’ve got to go into the conversation with the intention to learn something, not prove something!

When you’re trying to prove something, you’re not really listening. As the other person speaks, you sit there thinking of what you want to say to defend your position and being right. It’s going to get you nowhere and will only deepen the divide.

You’ve got to listen like you’re wrong. Right now, I want you to stop and ask yourself, “Is it safe to assume I’m wrong about something in the world right now?” or “Have I ever had a situation before where I was so sure I was right and then later realized I was wrong or screwed it up in my thinking?” Of course you have. So this conversation might be one of those and you need to be open to that — open to the fact that there’s another viewpoint or another way of looking at this situation.

Let go of being certain and what you believe is the way something has to be and see about what you could create with this other person.

Your opinion or preference about something doesn’t have to be a final answer. It’s not something you need to defend. Think of it, instead, as a starting place for conversation.

In her wonderful book I Never Thought of It That Way, author Monica Guzman says, “If you come into a conversation holding your opinions more loosely, it can make it easier for everyone in it to explore each other’s perspectives, rather than take turns presenting and defending them.” She talks about offering your opinion as a snapshot of your current thinking.

She says that “presenting them as changeable and movable from the start gives you room to revisit and rearticulate them as you let them mingle with others’ beliefs. It’s not to be cagey or to play down your passions, but to stay open, glide into the flow of conversation, and encourage others to loosen up, as well.”

I’ve often said you shouldn’t SAC your relationship. Don’t offer Suggestions, give Advice or Criticize. Asking questions is ALWAYS the answer, especially when you’re entering a difficult conversation. If you’re out to learn something, and not prove something, you’ll ask questions to help you understand what the other person is thinking and feeling.

Here’s what I want you to do. Any time you find yourself wanting to defend or state something again, stop and ask at least one more question instead. Focus on what the other person is saying instead of what you want to say, and you’ll find that difficult conversations aren’t so difficult. I’ve found that going into a conversation this way actually calms me down! I’m no longer worried about defending anything, so I don’t feel any pressure. I don’t need to talk so much as I’m allowing space for the other person to tell me their thoughts and needs. It’s amazing how much easier it is when you really get into this head space.

Wrap Up on Having Difficult Conversations

You might be sitting there right now thinking, “That’s great Abby, but when do I get to say what I’m feeling?! This is all about them!

If you’re wondering that it’s because you haven’t truly had a conversation this way. When you’re curious and calm the other person changes and the whole dialogue shifts! You’re not going to feel or think the same after hearing from the other person if you truly put on that hat!

So, what you’ll be saying and thinking at the end of this conversation will be different than at the beginning!

Mónica Guzmán, I Never Thought of It That Way: How to Have Fearlessly Curious Conversations in Dangerously Divided Times

3 Tips to Calm Yourself in Seconds